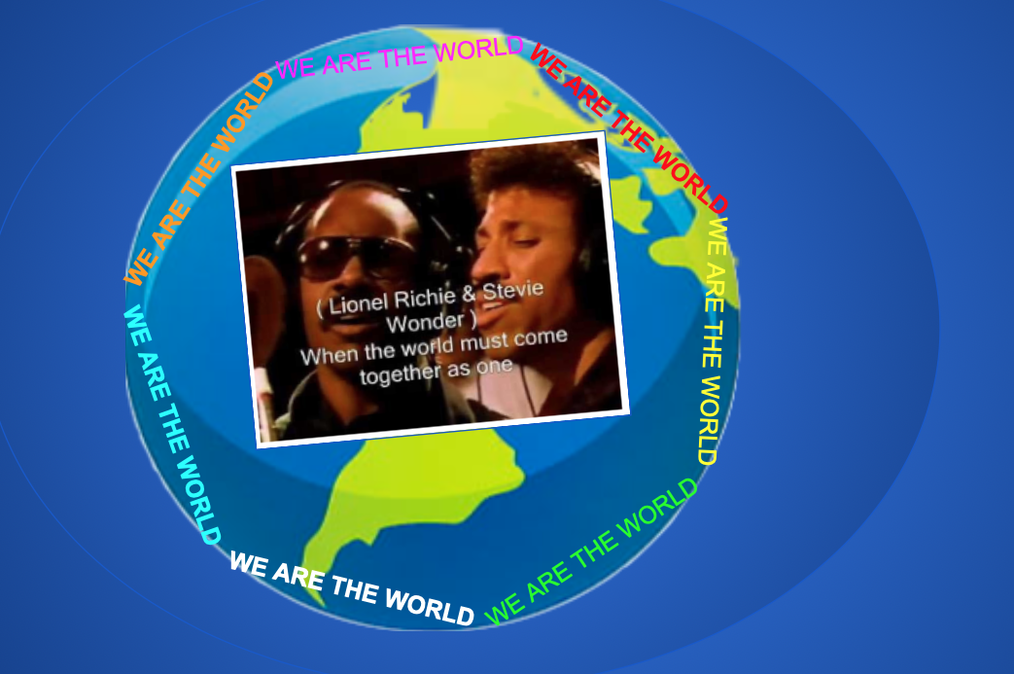 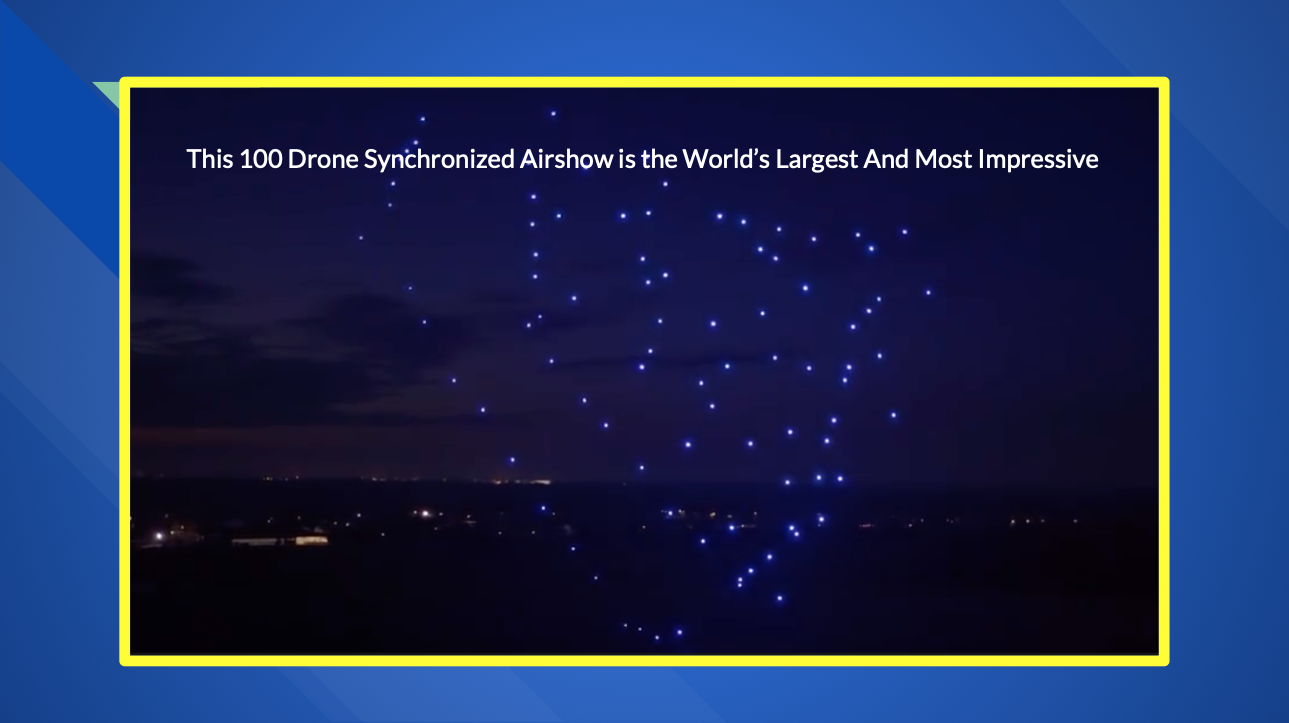 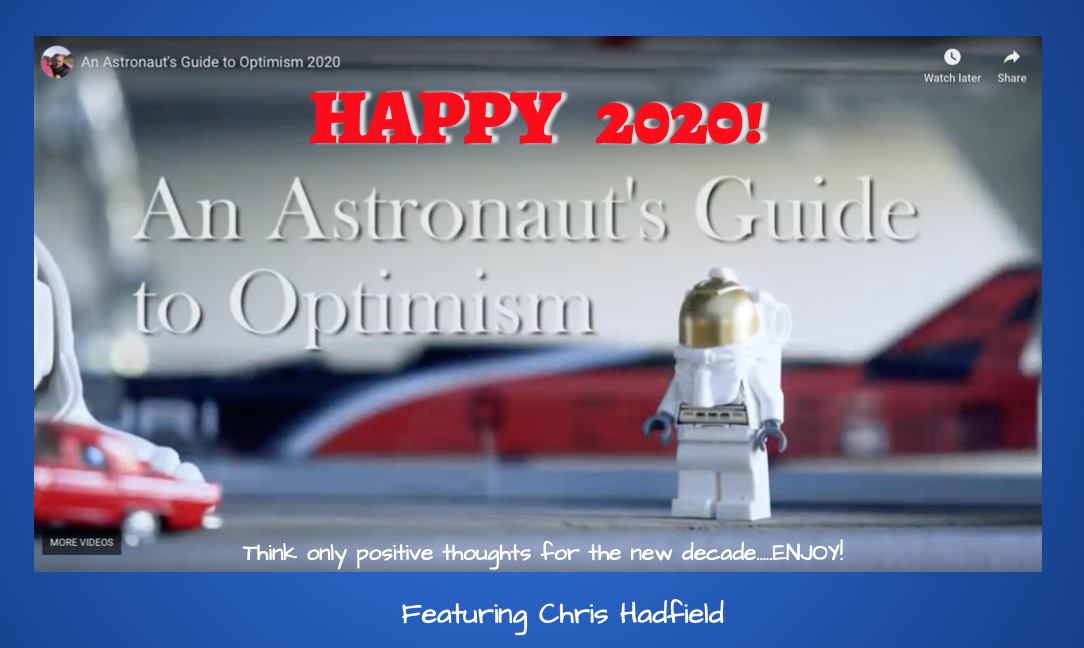 ​WITH ALL THAT IS HAPPENING IN OUR WORLD THE PAST FEW DAYS,
I ENCOURAGE YOU TO WATCH THIS AND SMILE.....These moments are PURE MAGIC!
(Three minutes of your time.....you will feel better.) 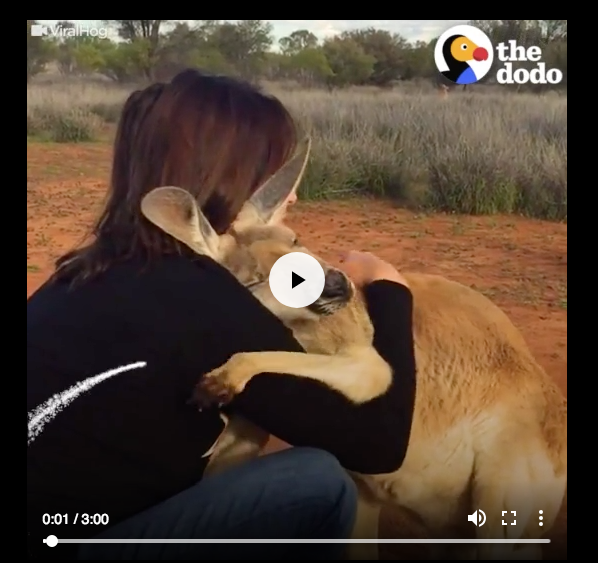 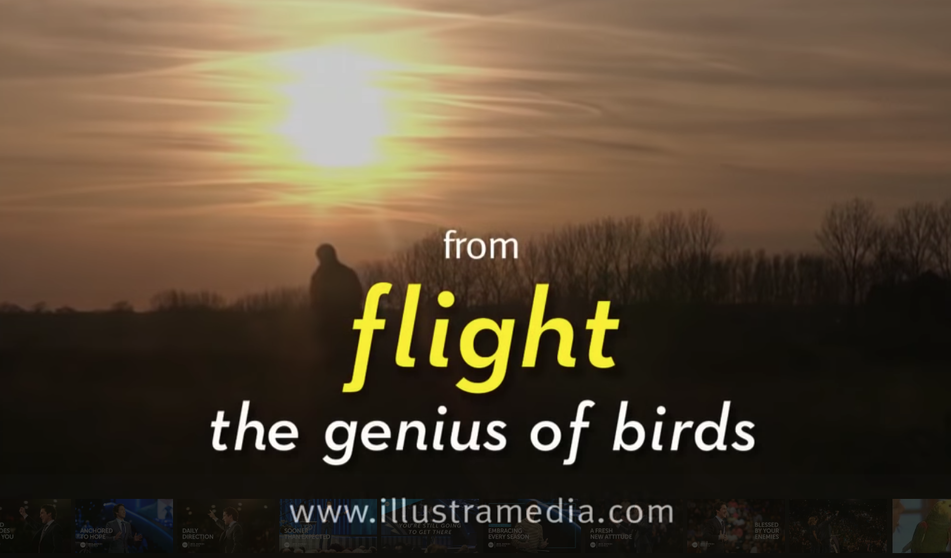 Creation Calls... (So beautiful! a must-see )

TAKE A LOOK AT THIS HAPPY SMILING MAN AND THEN
​COUNT YOUR BLESSINGS!

WHEN YOU FEEL LIFE IS A CHALLENGE, TAKE A LOOK AT THIS VIDEO. YOU'LL BE GLAD YOU DID.
HIS NAME IS CHRIS KOCH AND HE IS FROM NANTON, ALBERTA.
HE SPENDS HIS SPRING, SUMMER, AND FALL WORKING ON A FARM NEAR
TORQUAY, SASKATCHEWAN. (click the picture to watch) 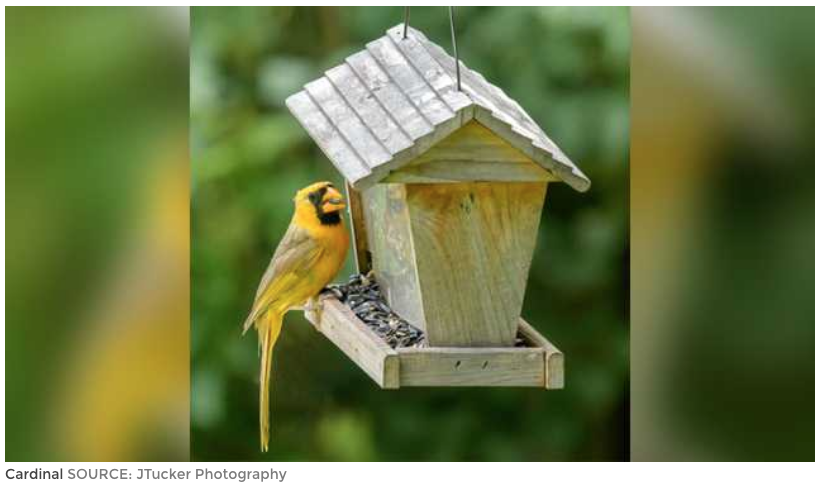 I've learned....
That having a child fall asleep in your arms is one of the most peaceful feelings in the world.

​I've learned....
That being kind is more important than being right.

I've learned....  That you should never say no to a gift from a child.

I've learned....
That I can always pray for someone when I don't have the strength to help him in any other way.

I've learned....
That no matter how serious your life requires you to be, everyone needs a friend to act goofy with.

​I've learned.... That sometimes all a person needs is a hand to hold and a heart to understand.

I've learned....
That simple walks with my father around the block on summer nights when I was a child did wonders for me as an adult.

I've learned.... That it's those small daily happenings that make life so spectacular.

I've learned...  That under everyone's hard shell is someone who wants to be appreciated and loved.

I've learned.... That to ignore the facts does not change the facts.

I've learned....
That when you plan to get even with someone, you are only letting that person continue to hurt you.

I've learned.... That love, not time, heals all wounds.

I've learned....That everyone you meet deserves to be greeted with a smile.

I've learned....That no one is perfect until you fall in love with them.

I've learned.... That opportunities are never lost; someone will take the ones you miss.

I've learned.... That when you harbour bitterness, happiness will dock elsewhere.

I've learned....
That I wish I could have told my Mom that I love her one more time before she passed away.

I've learned....
That one should keep his words both soft and tender, because tomorrow he may have to eat them.

I've learned....
That a smile is an inexpensive way to improve your looks.

I've learned....
That when your newly born grandchild holds your little finger in his little fist, you're hooked for life.

I've learned....
That everyone wants to live on top of the mountain, but all the happiness and growth occurs while you're climbing it.

I've learned.... That the less time I have to work with, the more things I get done.

To all of you.... It's National Friendship Week..

Show your friends how much you care. 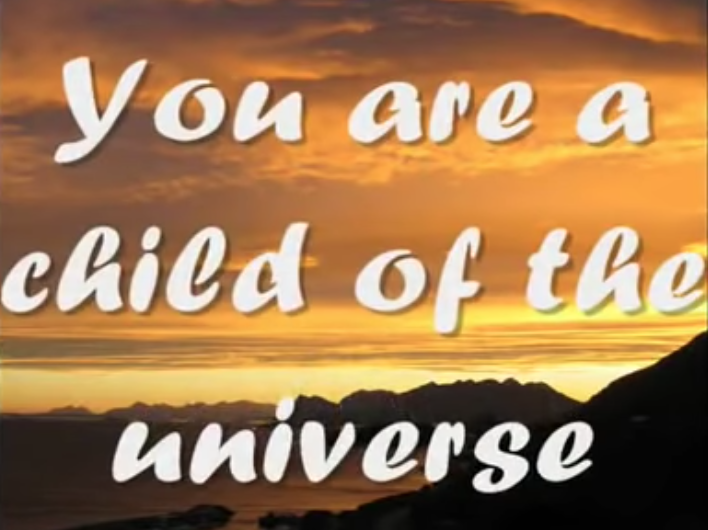 The voice of an angel...

The photography is stunning - this is something to be enjoyed and shared. 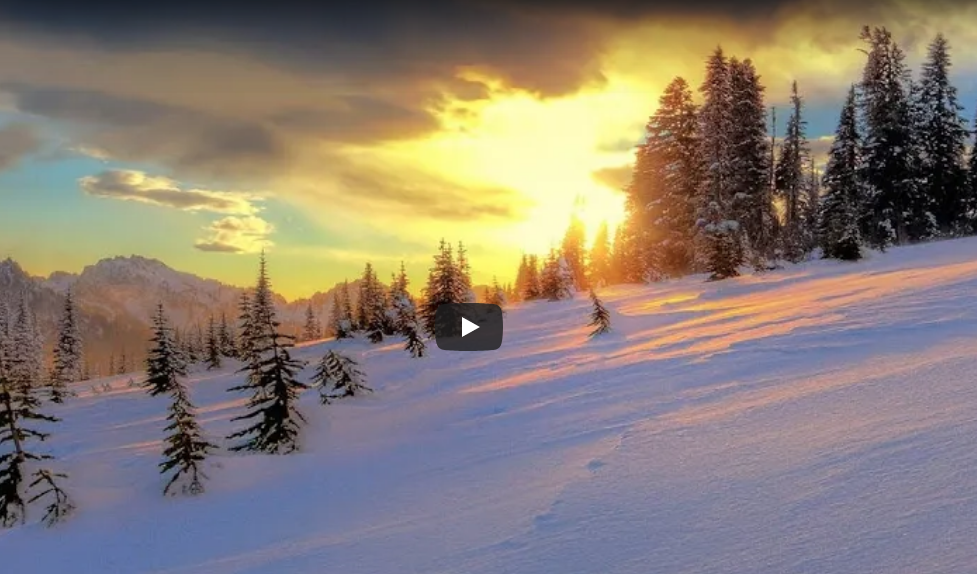 Watch and listen to The Pickleball Life - an original song by Miguel Enciso. 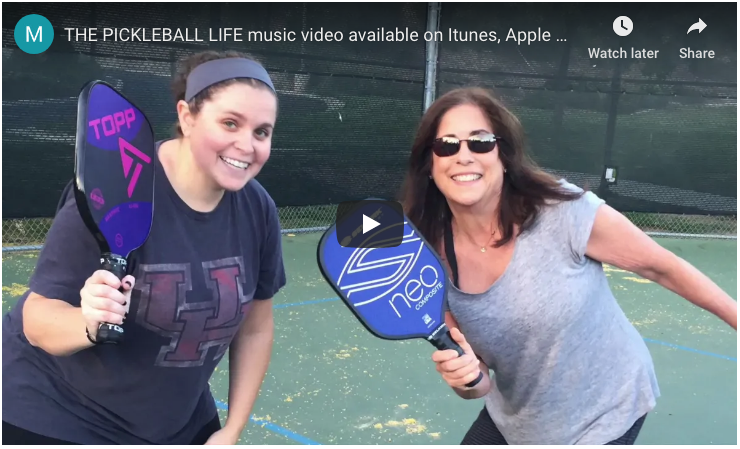 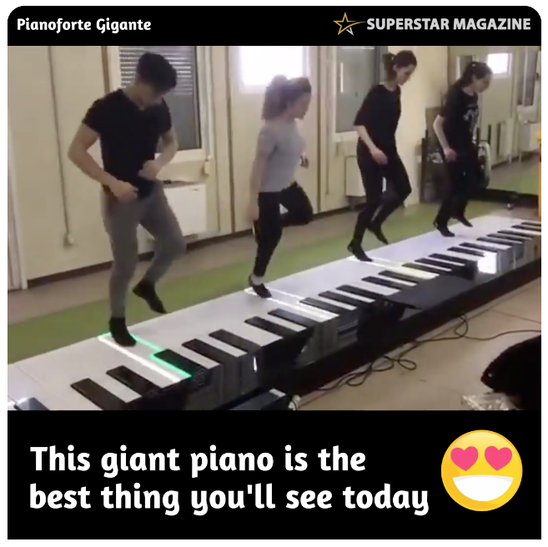 The True Story of Dindam, the Penguin 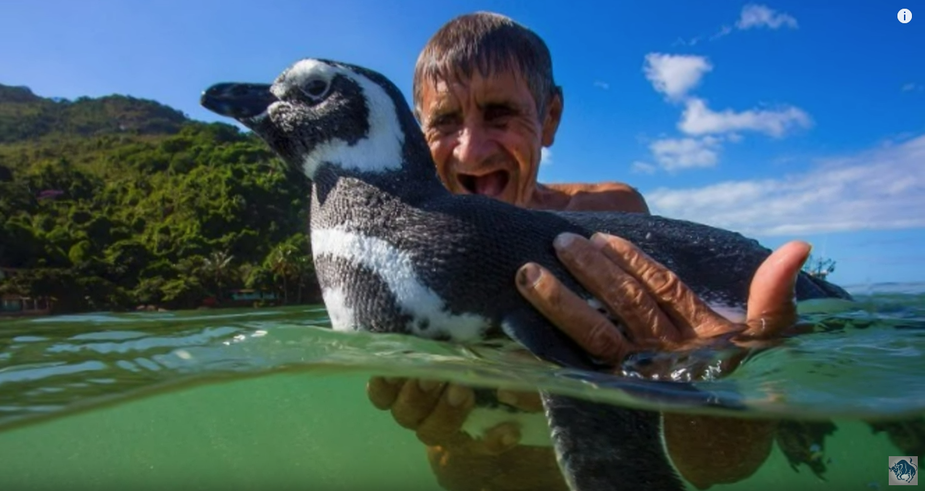 Published on 15 Mar 2016
SUBSCRIBE 2.2K
Watch the true story of Dindim, the rescued penguin from Ilha Grande, Brazil, that returns every year to his rescuer according to biologist Joao Paulo Krajewski. He presented the story about the penguin Dindim for the segment Domingão Aventurain of Globo TV, Brazil. The heartwarming story went viral on social media and internet all over the world. He said that several news agencies and websites have published versions of the story that were filled many misconceptions and misinformations. 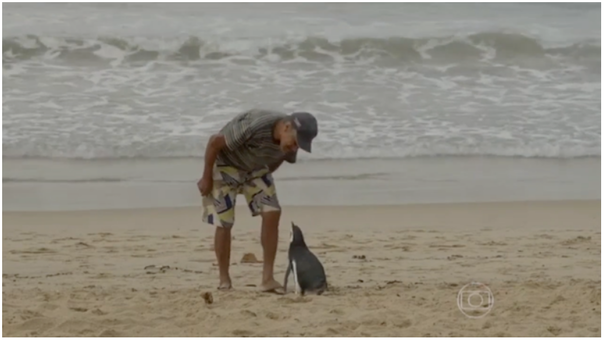 
​Retired bricklayer and part-time fisherman Joao Pereira de Souza, 71, who lives in an island village just   outside Rio de Janeiro, Brazil, found the tiny penguin, covered in oil and close to death, lying on rocks on his local beach in 2011.

Joao cleaned the oil off the penguin's feathers and fed him a daily diet of fish to build his strength
​He named him Dindim. 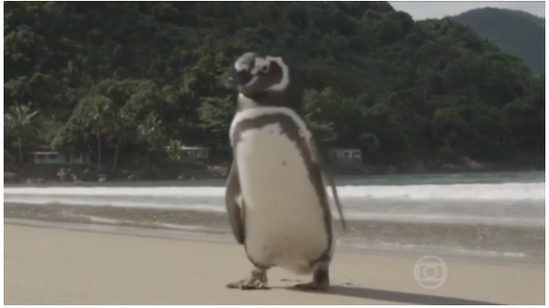 After a week, he tried to release the penguin back into the sea.   But, the bird wouldn't leave.   'He stayed with me for 11 months and then, just after he changed his coat with new feathers, he disappeared,' Joao recalls.
​
And, just a few months later, Dindim was back. He spotted the fisherman on the beach one day and followed him home. 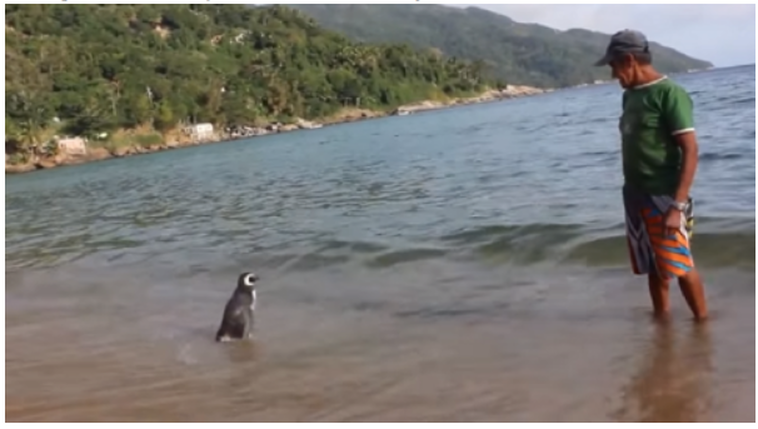 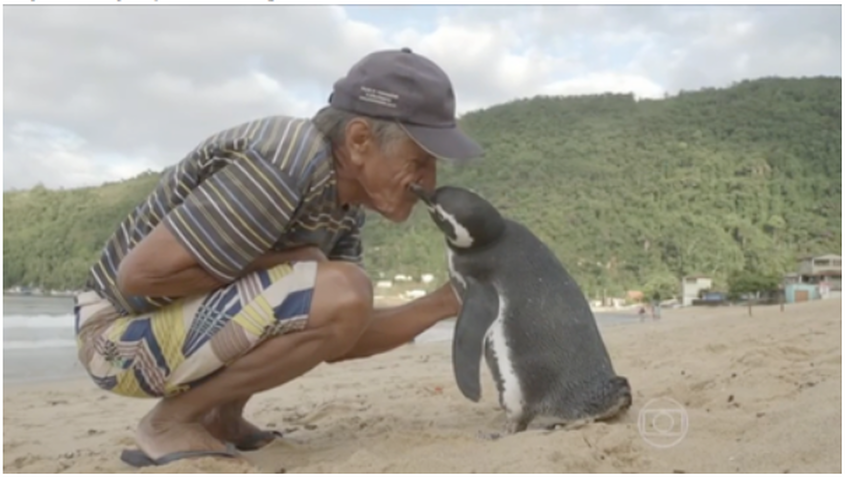 ​For the past five years, Dindim has spent eight months of the year with Joao and is believed to spend the rest of the time breeding off the coast of Argentina and Chile .
It's thought he swims up to 5,000 miles each year to be reunited with the man who saved his life.
​'Everyone said he wouldn't return but he has been coming back to visit me for the past four years.
He arrives in June and leaves to go home in February and every year he becomes more affectionate as he appears even happier to see me.'
Biologist Professor Krajewski, who interviewed the fisherman for Globo TV, told   The Independent  : 'I have never seen anything like this before.   I think the penguin believes Joao is part of his family and probably a penguin as well'.
'When he sees him , he wags his tail like a dog and honks with delight.   And, just like that, the world seems a kinder place again and proves the saying, love makes the world go round ! 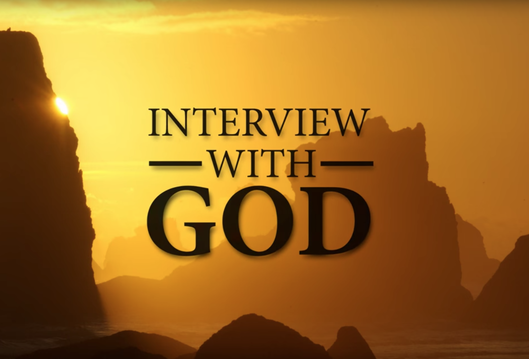 ​SUNSET AT THE NORTH POLE 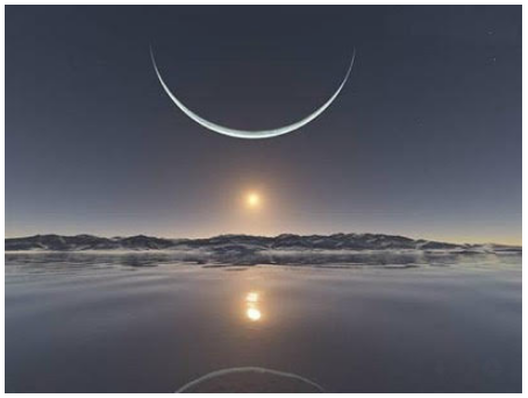 This is the sunset at the North Pole with the moon at its closest point in June. A scene you will probably never get to see in person, so take a moment and enjoy God at work at the North Pole. You also see the sun below the moon. An amazing photo and not one easily duplicated.   You may want to pass it on to others so they can enjoy it. The Chinese have a saying that goes something like this: 'When someone shares with you something of value, you have an obligation to share it with others!' 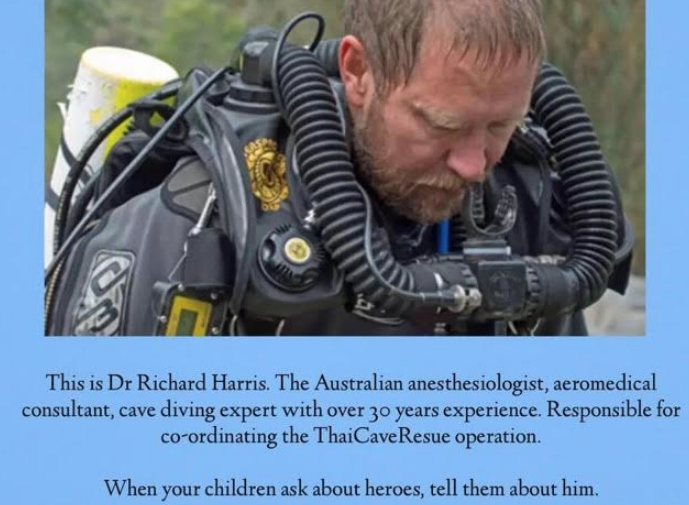 ​This is the story of Australian diving expert Dr Richard Harris who was summoned to help with Thai cave rescue. This is the incredible and tragic story of the Australian diving expert who rushed from holiday to join the Thai cave rescue. Cave diver and anaesthetist Dr Richard Harris from Adelaide, dived with the rescue team on Sunday to medically assess the 12 boys and their coach trapped inside a flooded cave in Thailand. Dr Harris was specifically summoned for the rescue mission due to his medical expertise and experience in dangerous diving missions.
15 Dalai Lama Quotes That Will Change Your Life 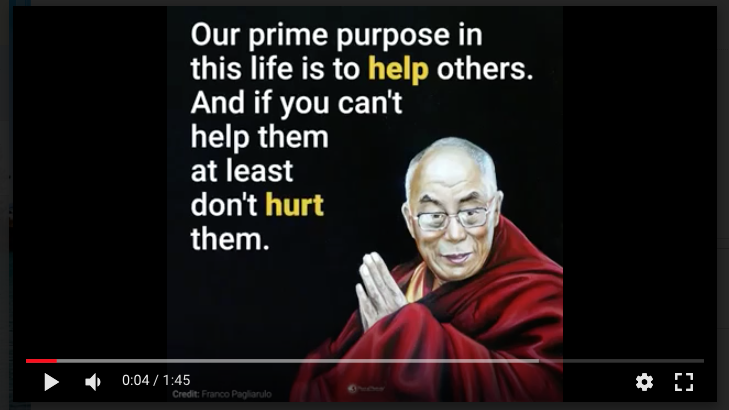 Amazing does not even describe this guy!
​

The young man with no arms is our good friend Alvin Law who comes from Yorkton, Sask.  One day back in 1980 the RCMP Band was touring the Province of Sask. and stopped in Yorkton to do a concert and work with the students in the music program at the District High School.  We witnessed this young person who was a thalidomide child playing the trombone with his feet.  He balanced himself on a tall stool while he played the slide and held the instrument with his two feet.  He was very good in playing the instrument.  The Band had planned on doing something special the following year for the International Year for the Disabled and we asked Alvin if he would like to come to be a soloist on our National Arts Center Concert.  He said he would and the Band members paid for his flight to Ottawa.  When he came on stage before the capacity audience he got the greatest ovation but when he sat on the stool in the midst of the various percussion instruments behind the trap set we couldn't believe what he was about to do.  Needless to say, he got a standing ovation from the crowd and the Band.  It was his birthday that day as well, 18 yrs. old and so Eleanor, my wife, invited Alvin and others over for a party at our house.  She had baked a cake, he sat down beside the coffee table and with his two feet cut pieces for everyone.  He never dropped a crumb.  Before he left our place he signed our guest book writing his name ALVIN LAW and beside it he drew two little feet.
Alvin works out of Calgary now as a motivational speaker and I was recently in touch with him.  He is doing well. Thought you would like to know this story.   Garth and Eleanor Hampson
Rock Balancing Land Art by Pontus Jansson 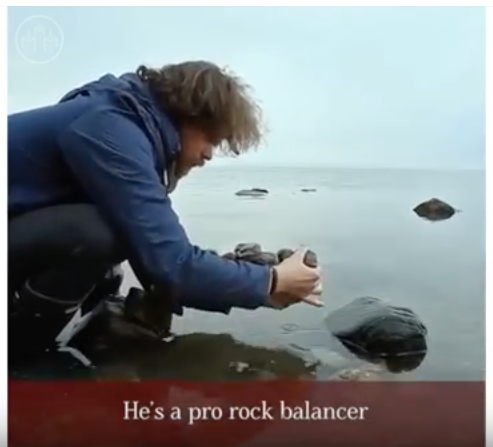 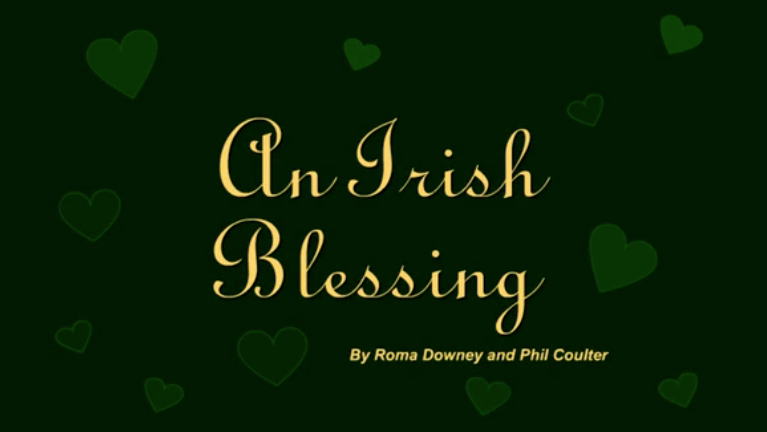 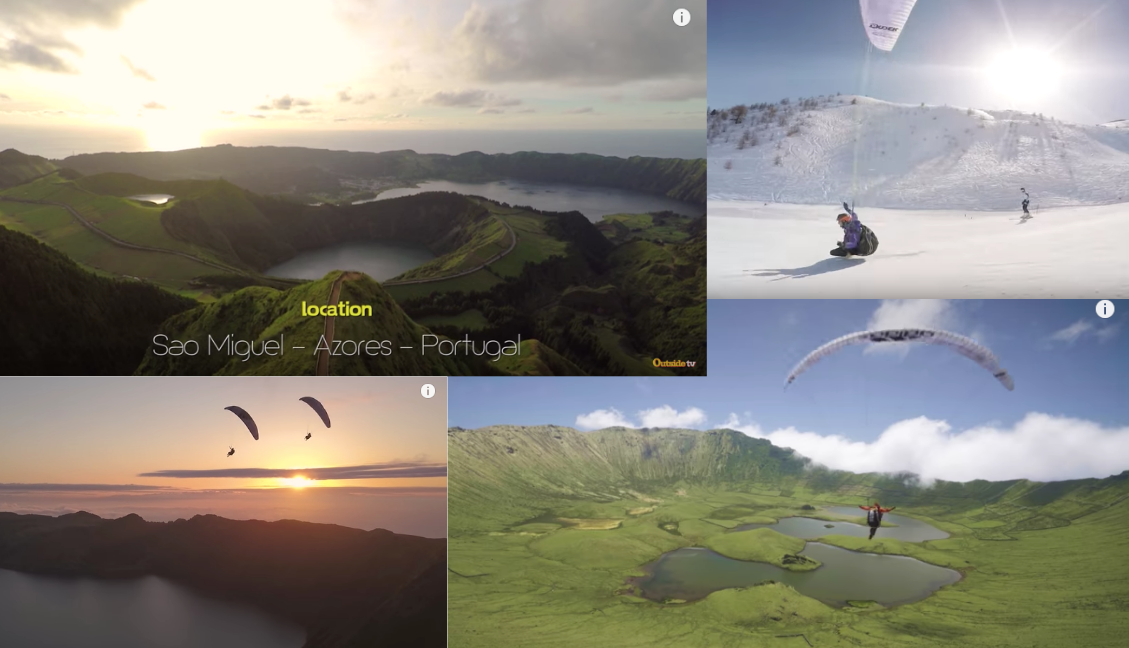 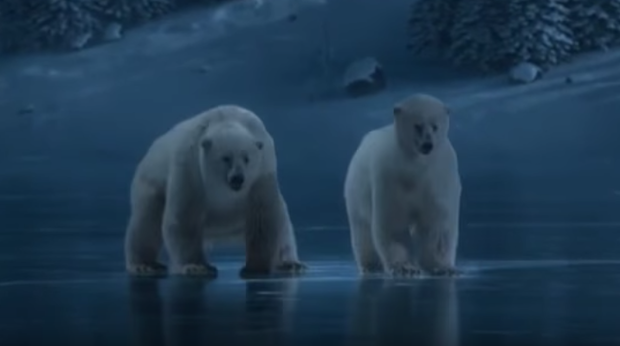 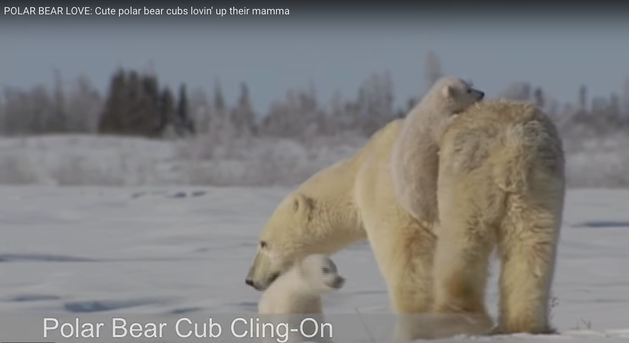 Click anywhere on the picture above or below to play.... 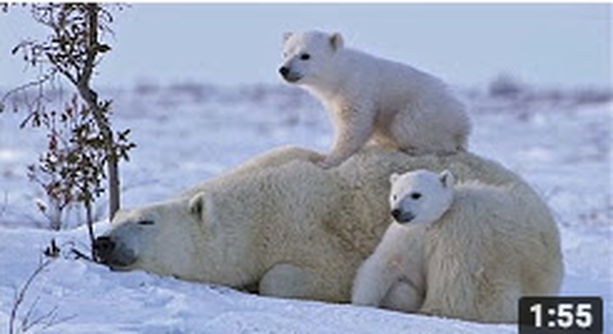 Below is
an amazing display of laser projection technology.
It is a photographic process that produces images thanks to the differences between 2 laser beams.
These images are projected into a gym using a special camera. There is not a drop of water in this room, let alone a whale .
Imagine seeing this when you are sitting at your high school gym.

This is soooooo COOL!   YOU GOTTA SEE IT! 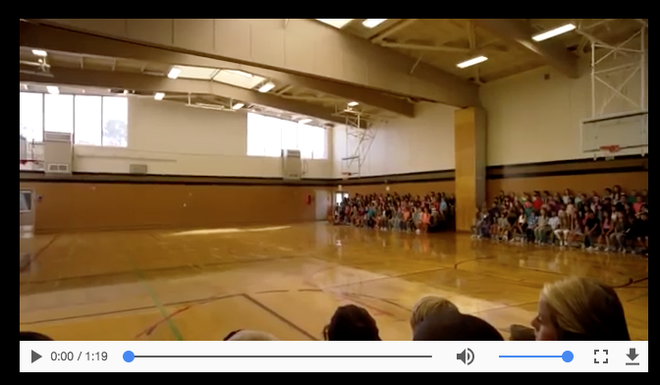 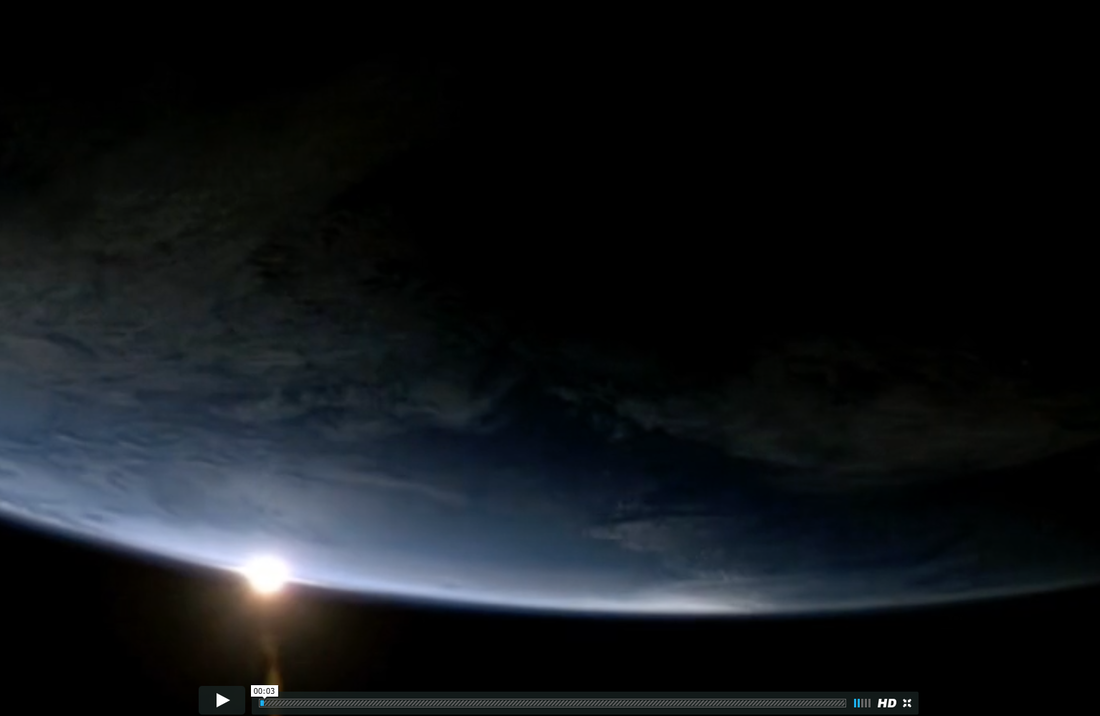