CONGRATULATIONS TO JAN MEDLAND
​
ON HER BRONZE WIN IN SARASOTA, 2019

Jan Medland won a bronze medal today, here in Sarasota...played very well in the heat....16 games in all...great to watch.
Members of the TPC showed up in fine style at
​the Summer Sizzler Pickleball Tournament
​in Collingwood, Saturday July 14, 2018.​
Participating in the Advanced Women's Category was Susie Keast who came away with the BRONZE.

Participating in the Intermediate Women's Category were Gillian Mayne, Rosemarie Wickens, Pat Ellis and Jean Grummett.  Gillian and Rosemarie, were persistent throughout and earned themselves the Silver Medal. Excellent job! Pat and Jean were pleased that they weren't whomped completely and were able to come out with two wins and two losses. Well done!

​Well done to all the participants for their great efforts!
Pictures courtesty of the GTPC 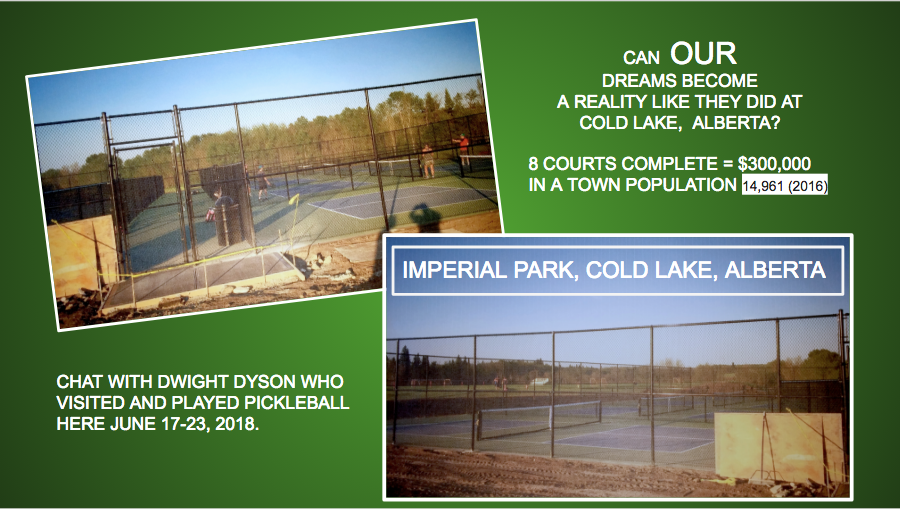 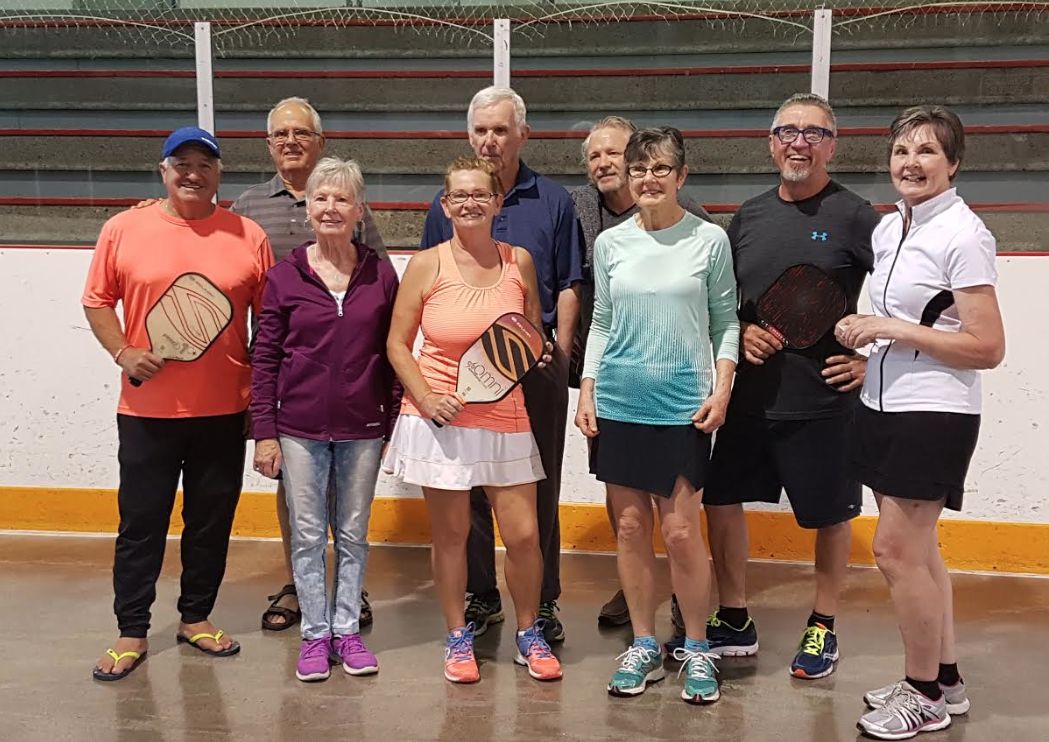 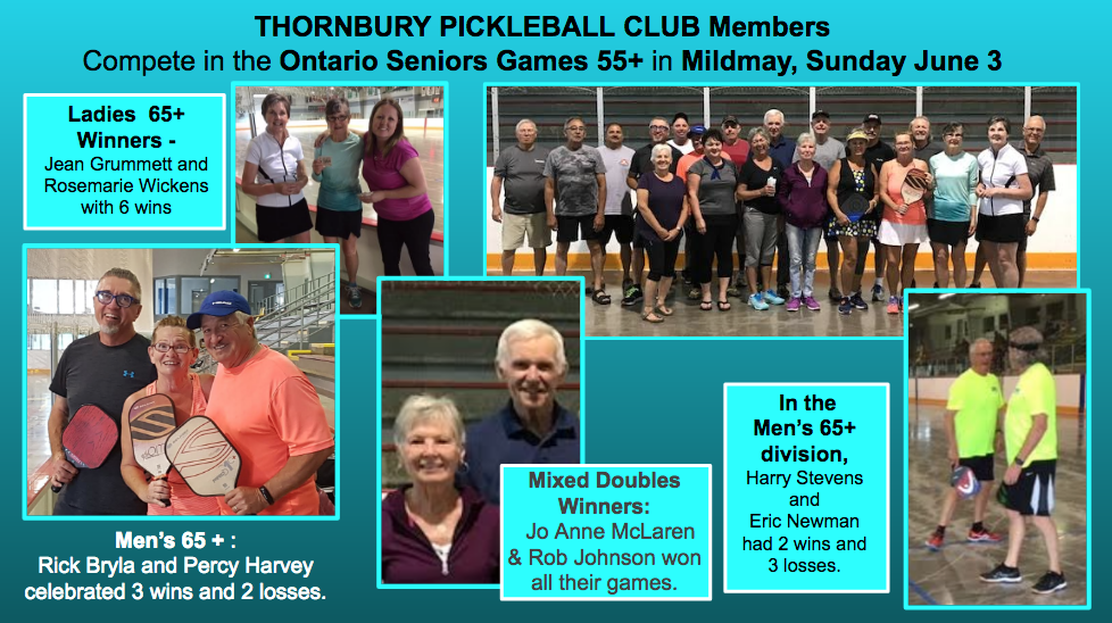 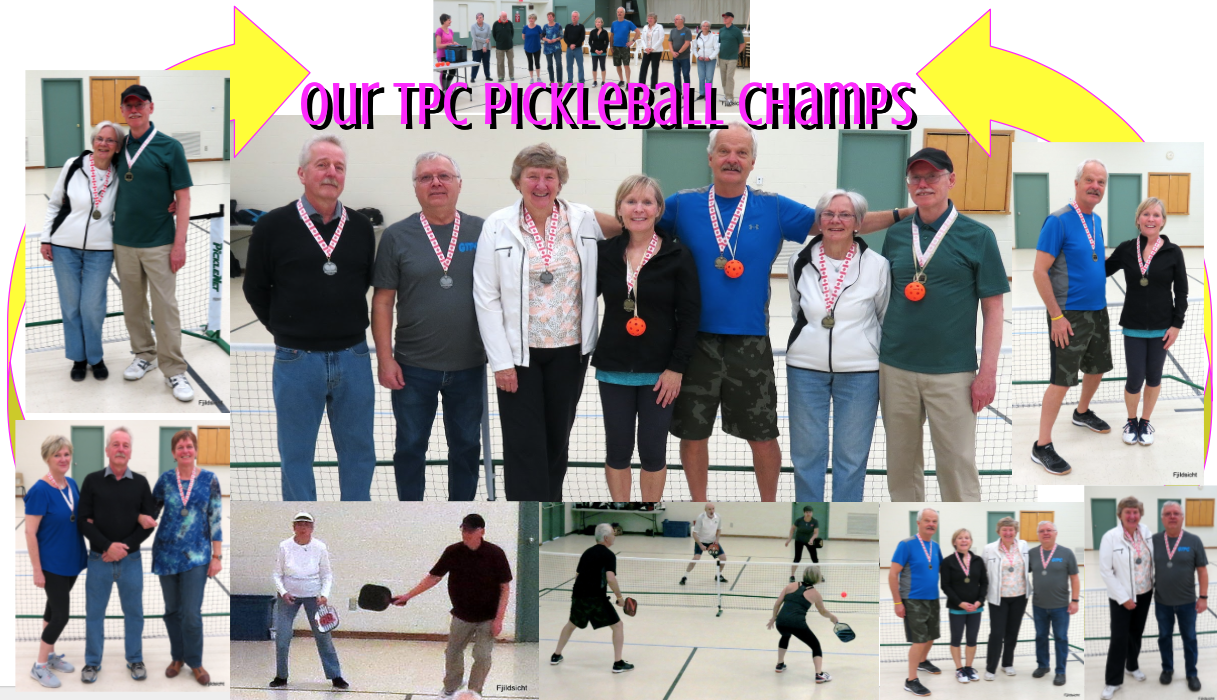 Another Great Day of Fun Pickleball Action at the TPC Thursday, April 13 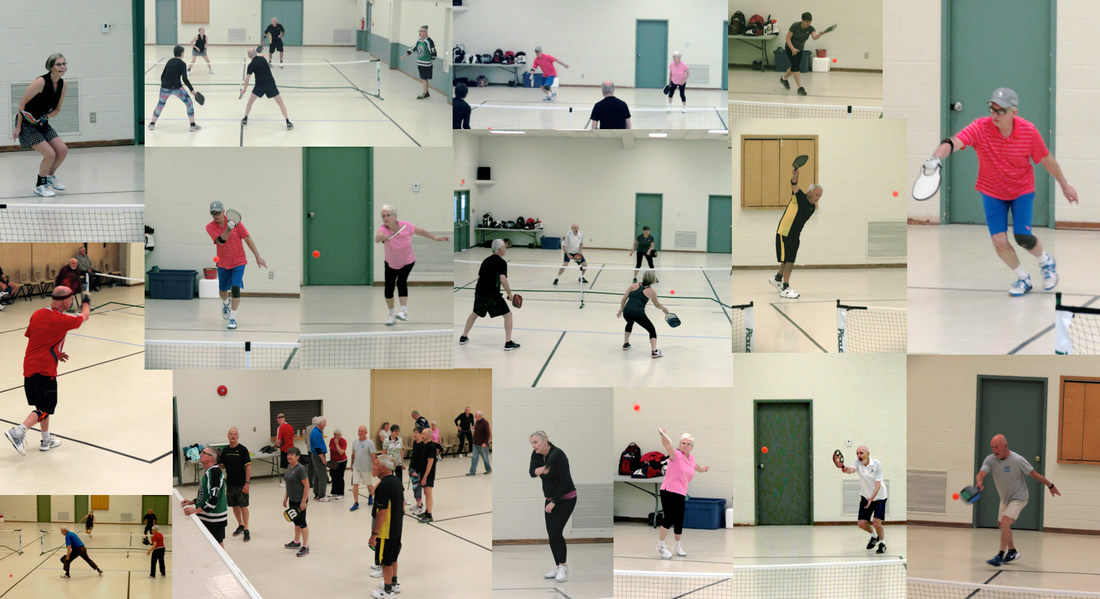 There was Great Action at the TPC Wednesday, April 11

The Group 1 Semi Finalists competing on Friday  are
​1. John Ross and Marie Green  2. Dwight Dyson and Jean Gauthier
3. Jane Dykstra and John Copeland 4. Chris Smart and Jim Molineaux
Congratulations to you all and Good Luck on Friday! 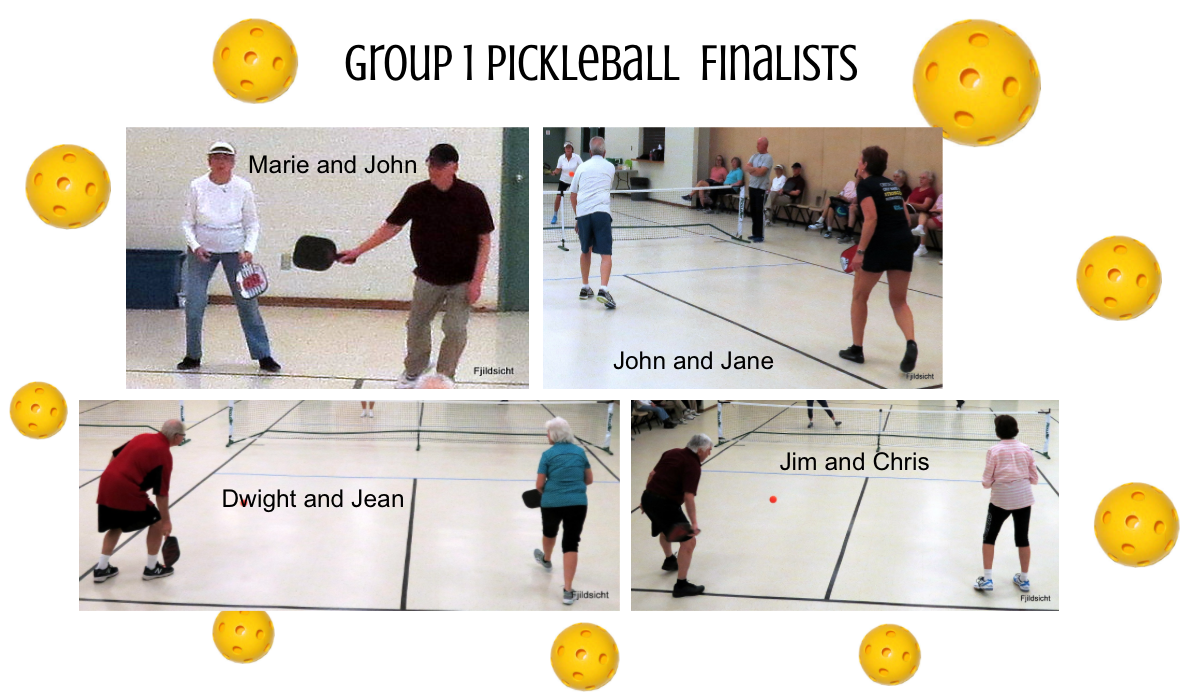 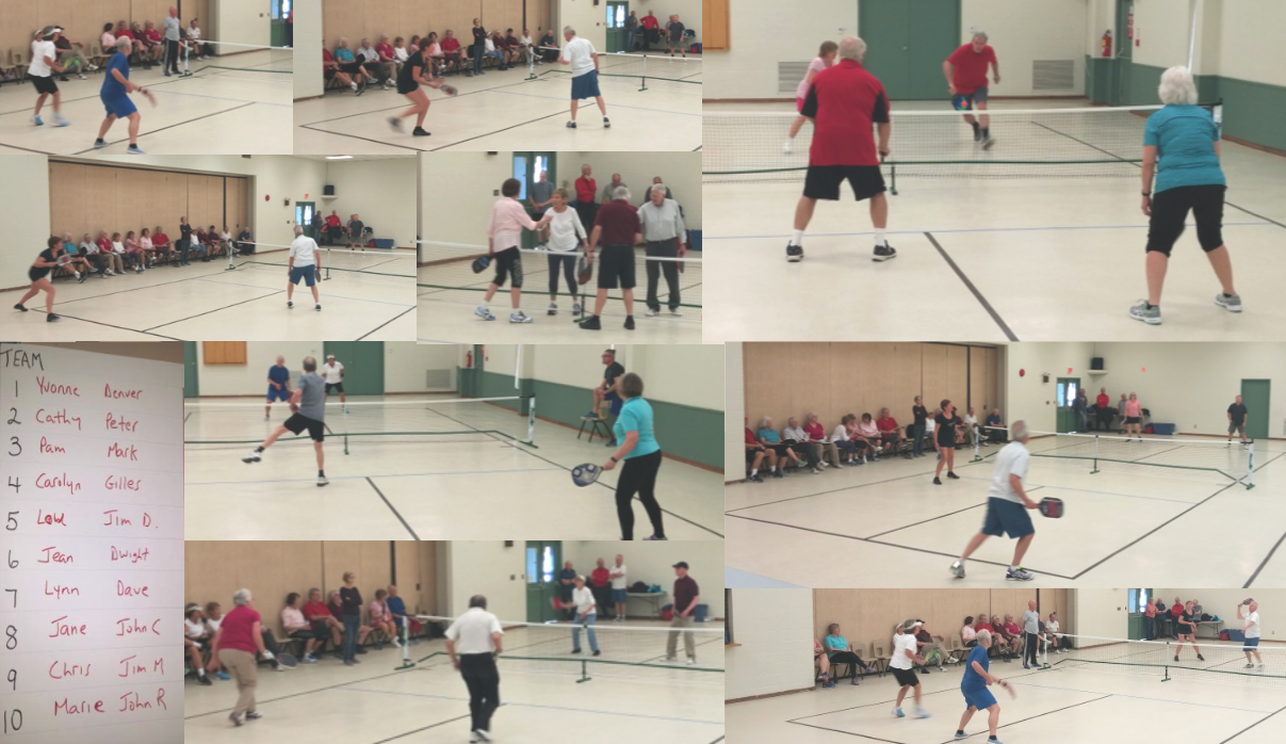 TPC has Great Showing in the Mountain Bash Tournament at Monterra 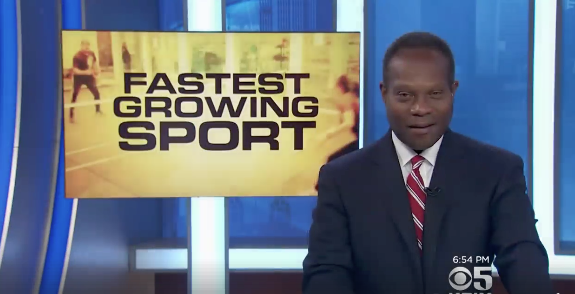 Rick and Rayne Promoting Pickleball in the south...

Medal Winners at the Ontario Senior Games in Sarnia, August 16, 2017 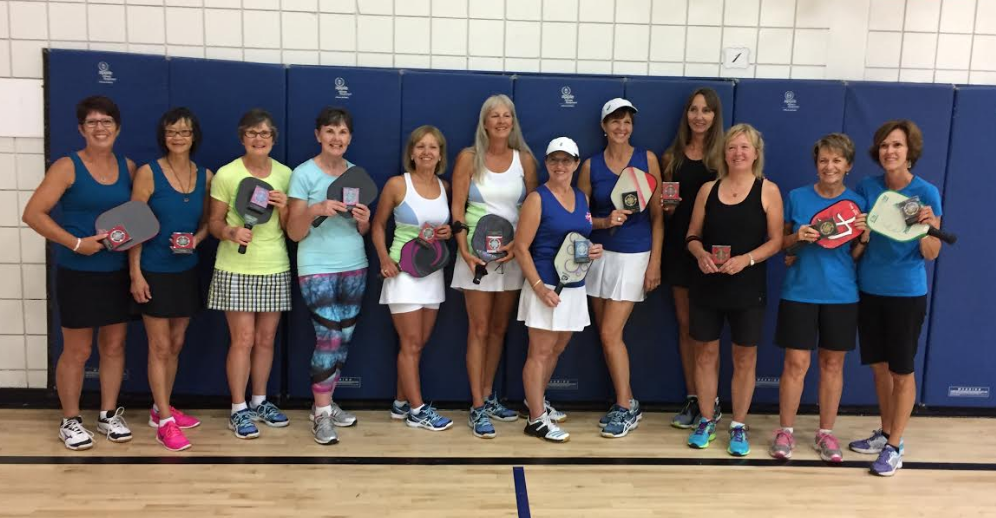 National Pickleball Day at the BVCC

The Blue Mountain Pickleball & Thornbury Pickleball Clubs  sponsored this NATIONAL PICKLEBALL DAY at the Beaver Valley Community Center Saturday, August 12.   Pickleball Canada was promoting in conjunction with ParticipAction, all Pickleballers across Canada get out and play and celebrate our great game.  A number of  our community members came to play and find out a little more about the game with the strange name!

A number of TPC members took advantage of the INGAME COACHING session with
​ Mark Renneson, Third Shot Sports at the Thornbury Community Centre, Thursday afternoon.  Besides learning the fine points of a legal serve and the non-volley zone, we also learned reasons behind Mark's Terms - 'Serve &Stay,' 'Return & Run,' 'Go for the sitting Duck!"   We are so lucky to have  a PB coach, like Mark, who lives nearby and can share his knowledge and expertise, as we learn more about playing pickleball.

Steeltown Tournament
​Our TPC members displayed their pickleball skills at the STEELTOWN TOURNAMENT in HAMILTON
winning two bronzes on Friday, May 12 and going for more hardware today, Saturday May 13.
GOOD LUCK to ALL!
​

CHECK this out.....
​Could this happen in the Town of the Blue Mountains? 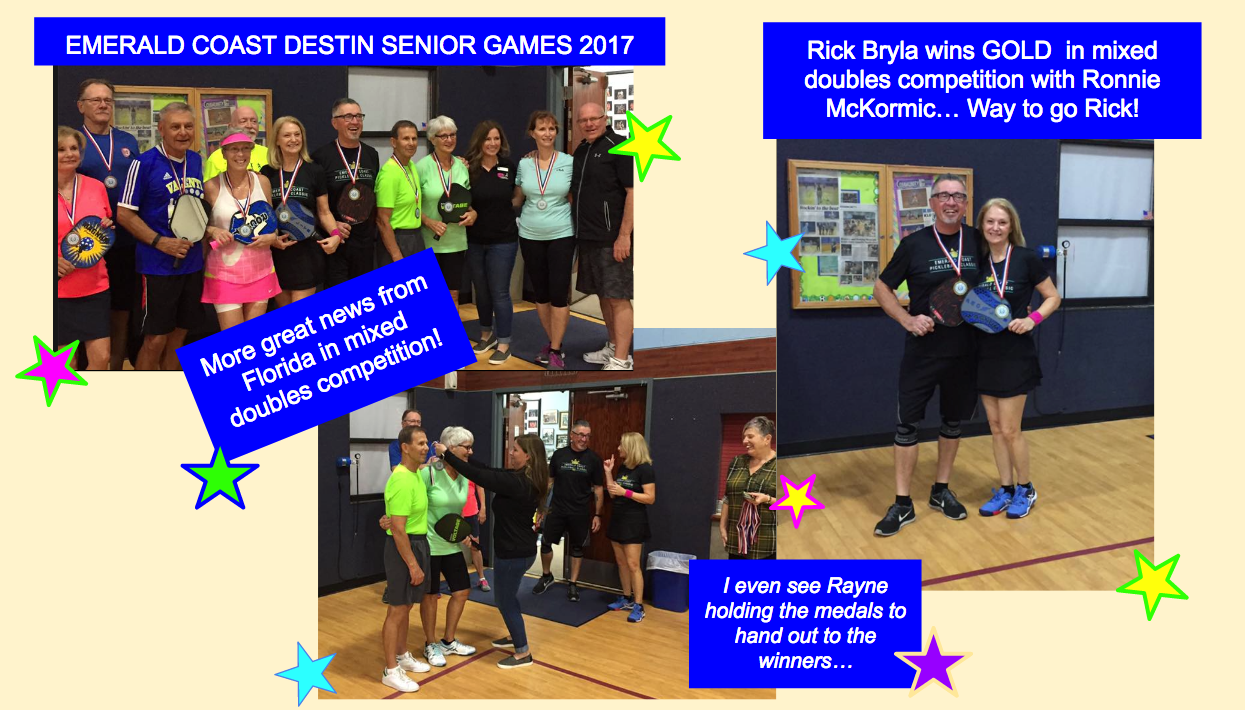 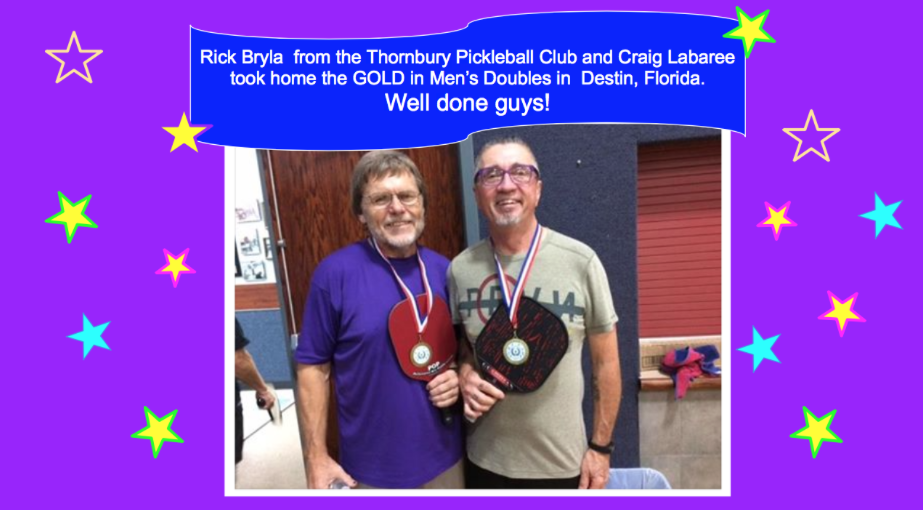 Shirley Harrison from our Thornbury Pickleball Club
wins bronze with her partner in the
Suncoast Pickleball Tournament held in ​Sarasota, Florida 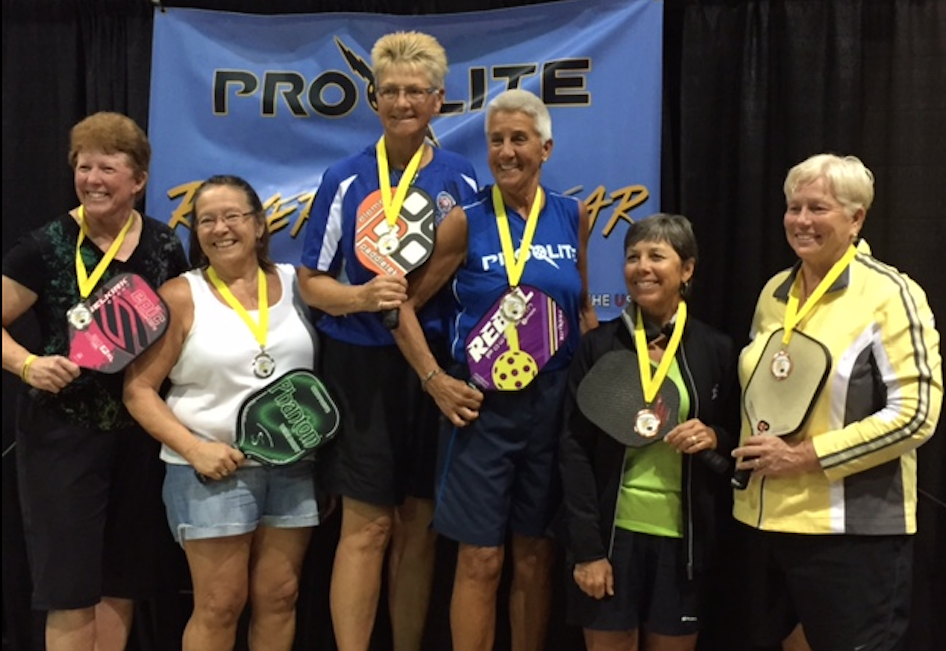 This Mercedes Benz Monterra Pickleball Championship was a 'Just for Fun' Pickleball/Tennis Tournament with Thornbury being the only club representing  Pickleball. Although the Tennis Tournament seemed to take priority, the tennis players did get to see a demonstration of Pickleball with  Brian Brooks and Garry Milley, the Pickleball Experts, becoming the Overall Champions at the end of the day.  Some of the tennis players did get brave and did participate in some of the pickleball matches demonstrating their great tennis moves but learning,  too, the suttle  differences in the two games. 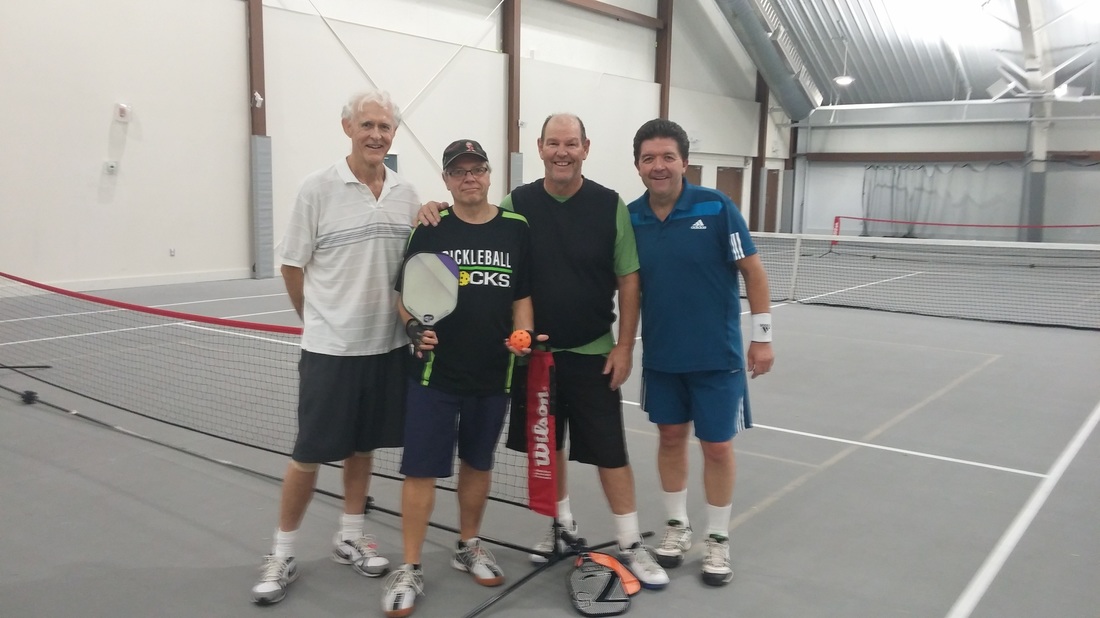 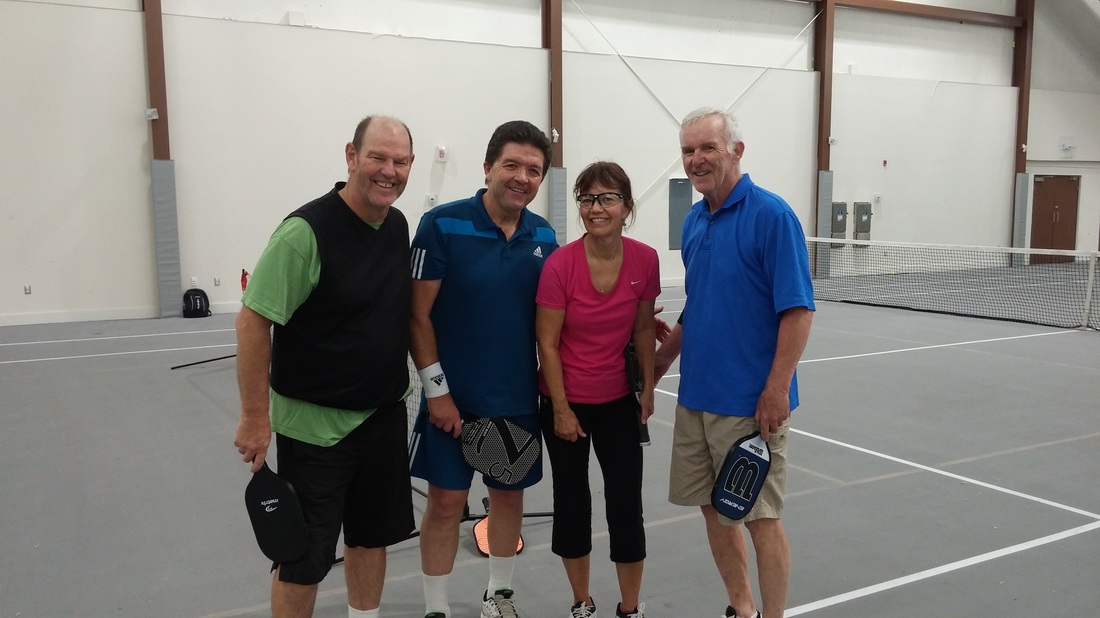 Rob and Jackie began their competition against fellow pickleballer Dwight and a girl who was a newbie to Pickleball and as a result were winners in that match.  They then played against Derek and Ray, two tennis players, who found out what losing was all about in their first game against Rob and Jackie.  Rob and Jackie held their own all the way with some unbelievable PB moves. However, the tennis players  caught on to the game well and went on to win the next two games with their great shots and consistent moves.

Although the tournament was unique in its setup,  it was a fun experience  with some good games and great shots!

​Members of the Thornbury Pickleball Club met at the Thornbury Community Centre for the first Annual General Meeting(AGM) Susan Bois, acted as Chair of the meeting, and welcomed the 47 members present.  Sue Boadway spoke about the club being founded in March of 2014 by herself, her husband, Bill, Harry Stevens and Rosemarie Wickens .  She thanked everyone for keeping the club running so smoothly. Discussions followed on the following issues - insurance coverage,  guests,  contact lists,  the two socail events,  benefits of being an all-in Club of the PAO, and issues re playtimes for each of the groups.  Following the discussions, the nine candidates for the 5 member executive positions spoke and the vote ensued. The new executive for the Thornbury Pickleball Club
for the 2016-2017 year are Paul Clements, Harry Stevens, Jean Grummett, Brenda Barron and Sue Boadway. 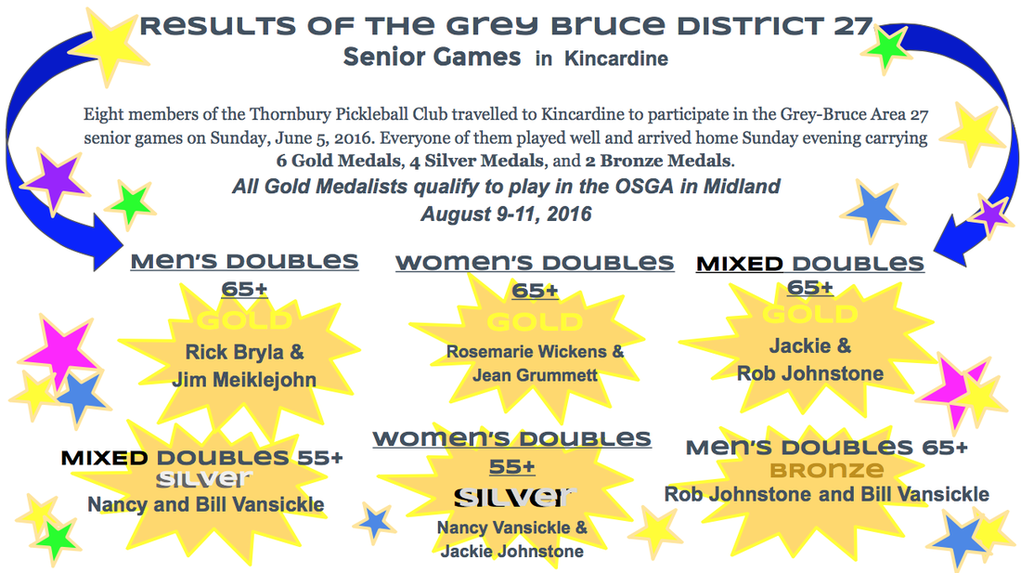 Mark's Summary of
INGAME COACHING SESSION
Tips that were highlighted:
Here is a summary of some of the things that were discussed during the in-game coaching sessions: 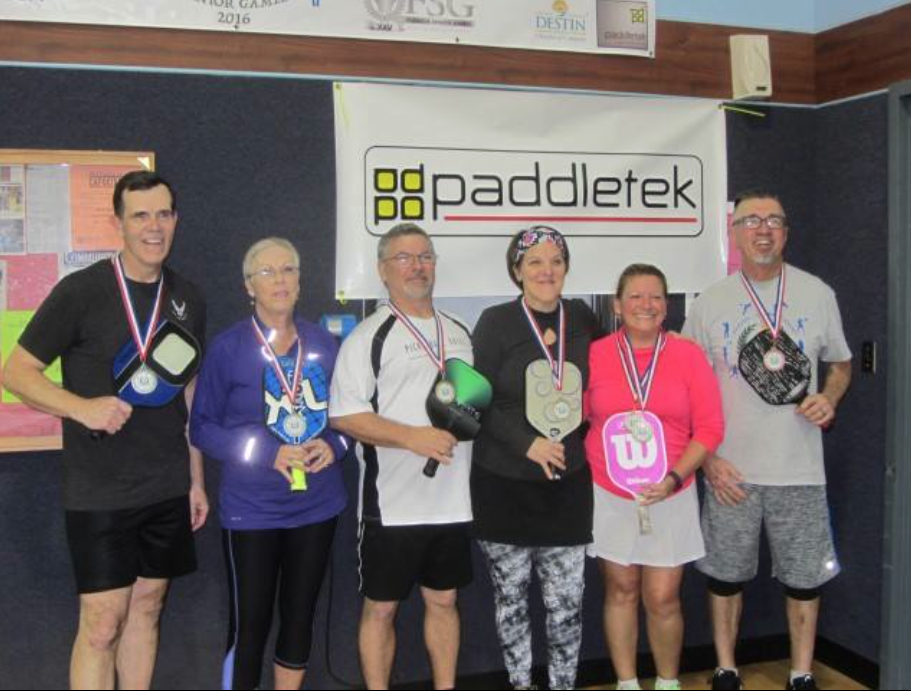 Rick competes in the Destin Emerald Coast Senior Games and
​is a medal winner! Way to go Rick!

RICK MAKES THE NEWS IN FLORIDA 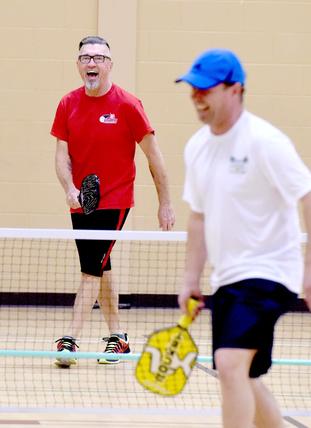 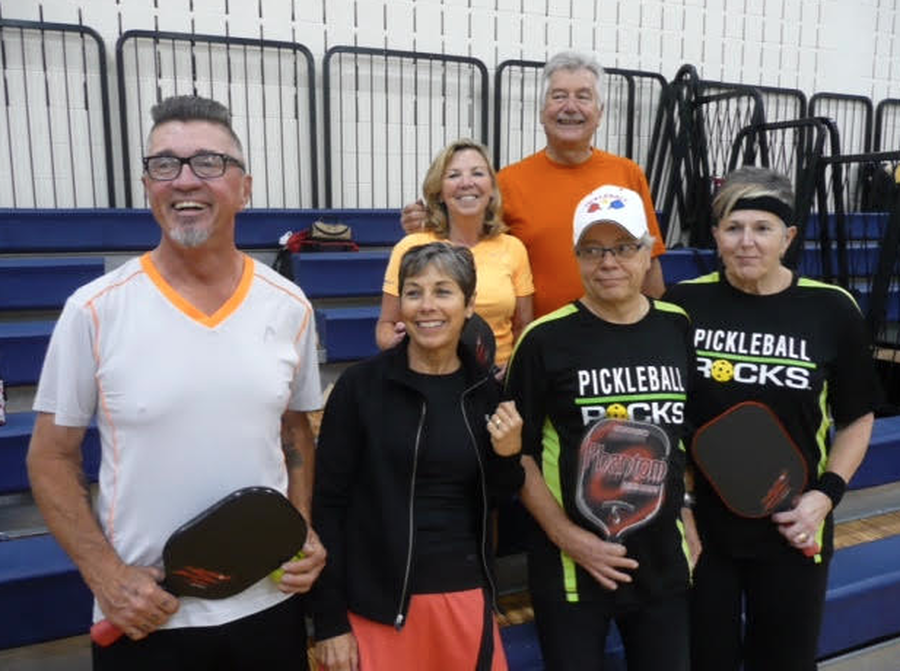 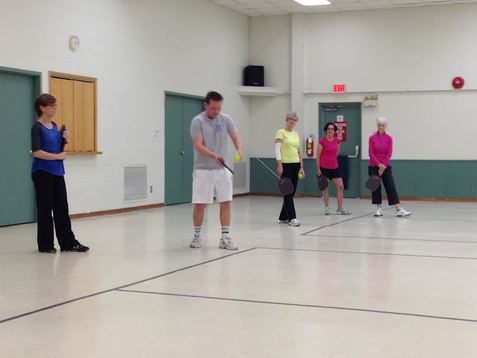 Lessons For Novice and Intermediate Players
​
Instructor Mark Rennison,  is always ready to help our members improve their pickleball skills.  His first lessons were for our members who were beginning to learn the game.
​
Mark visited our location again this week and worked with us for about an hour giving hints on how to improve dinking at the net and how to make our serves more difficult for our opponents to receive.

CAN PICKLEBALL BECOME A PAN AM GAME? 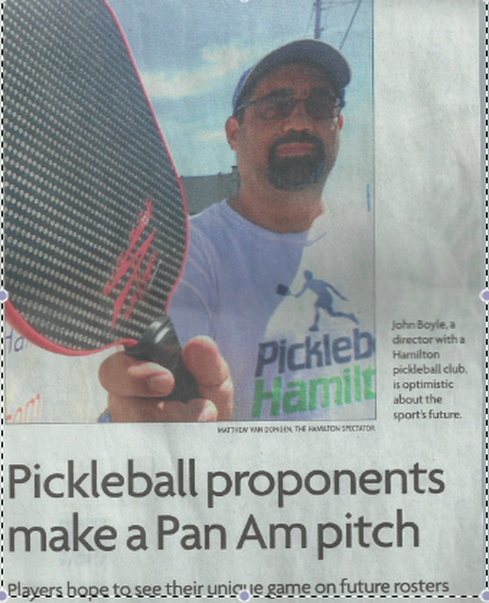 ​News flash: The Hamilton Pickleball Club has been awarded a grant from "All things Pan Am" and will be demonstrating the sport of Pickleball on Pier #4 in Hamilton On. this July.

The application was approved on the basis of "increasing awareness of this game and provide and opportunity for people of all socio-economic backgrounds to participate". Promotion of barrier-free activities.

Harry and Rosemarie have been invited to demonstrate and  represent the Thornbury Pickleball Association. If we make the Hamilton News station CHCH keep and eye out for our advertising sign.

PICKLEBALL MAKES THE PAN AM GAMES IN HAMILTON!

Harry Stevens and Rosemarie Wickens joined into the demo in Hamilton. As the soccer fans  were walking to the new Tim Horton's Field for the final two days of the competition they could join in to the play or watch at the sidelines. Many fans joined the Hamilton Pickleball club, others were amazed at the enthusiasm for the game.

John Boyle, a director of Hamilton Pickleball, told the soccer fans, "If you love sports like tennis, badminton or table tennis, or just like being active, this game can become addictive!"

When our club began in March 2014, everyone really enjoyed the physical workout from playing PIckleball!
Members  also enjoy the camaraderie with their fellow players, but most of all they enjoyed the laughter.  Sometimes the competition became challenging and exciting. That's when we realized that we needed to learn more about the strategies and skills of this game.

A clinic was planned with the great teachers we had in our area,
Bill Furse, Paul Brittain and Peter and Sue Singleton (the makers of a pickleball paddle).
Everyone learned many new skills to practice and were anxious to include them in the games.

October 14, 2014 -  Brian Brooks planned all aspects of the tournament, the play teams and their play times.
Others decided to have a social after. A great job planning the social was done by Barb Young and Candy Yeandle. 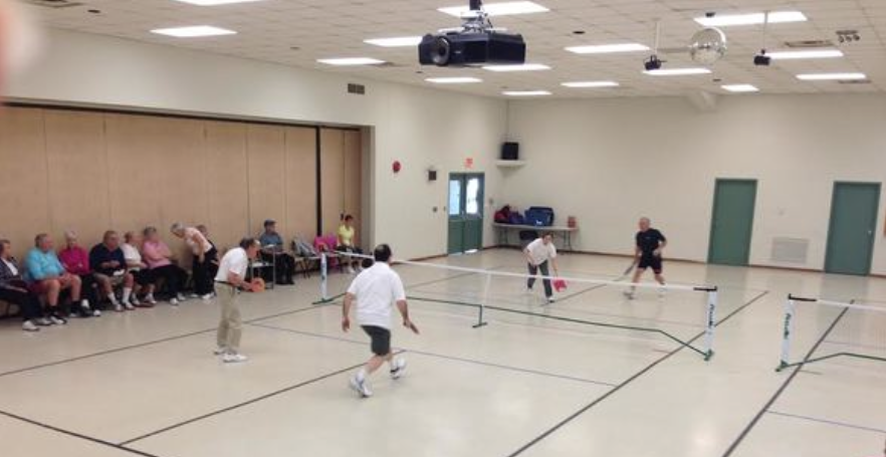